When you develop an Ethereum Dapp, once you have the frontend and the smart contract, you need to connect them together. This is not easy. Fortunately, Web3 is here to save you! Wait… not so fast… Actually, it’s not that easy to learn how to use Web3:

After you read this tutorial, you will learn all that 🙂 So stay focused.

By the way: I will publish this tutorial in several steps. Today is step 1. Each step will be published at 2 days interval.

Web3 is a Javascript Library to communicate with an Ethereum node. It offers an easy way to use the API of Ethereum. Ethereum has many APIs, but the most important ones for Dapp developers are eth_sendTransaction and eth_call. These 2 APIs allow you to interact with smart contracts. Web3.js is especially useful for these 2 APIs. 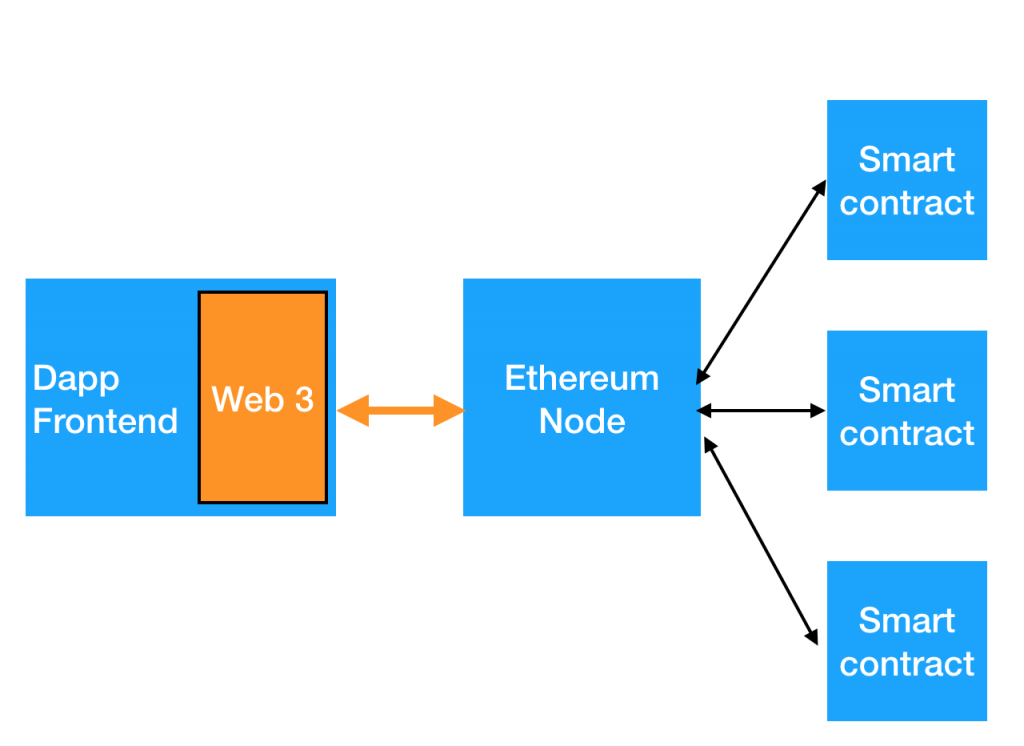 With these 2 APIs, you can specify: 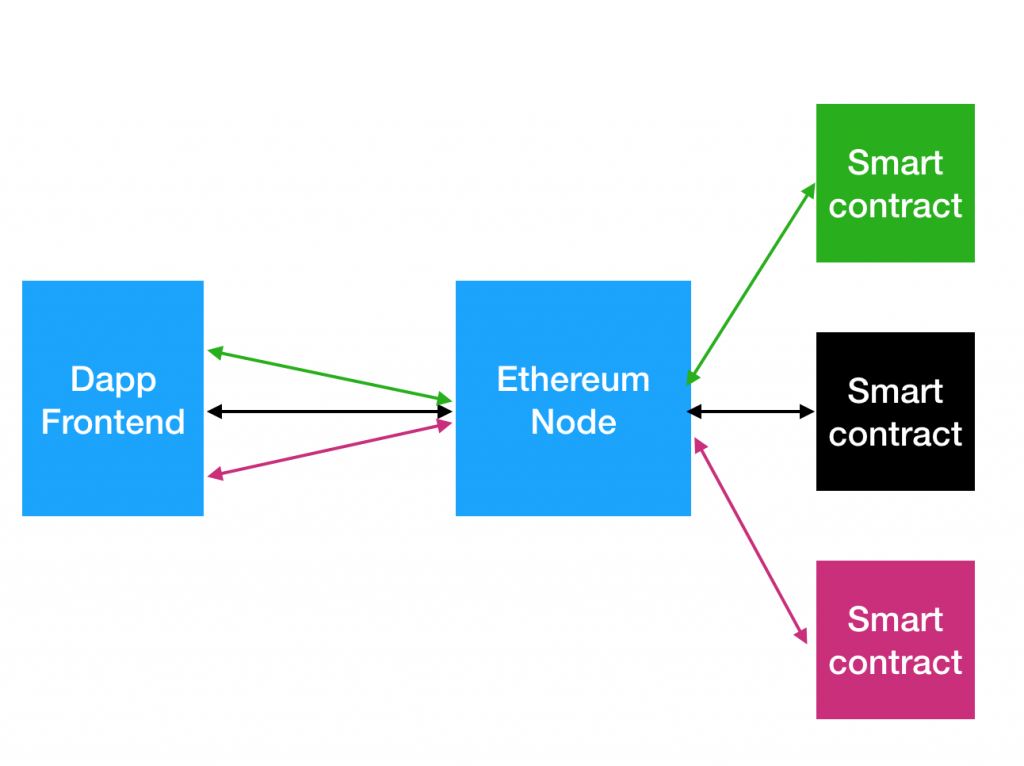 If you are interested in the technical details of the Ethereum API, it’s a JSON RPC interface, which means that it has a unique HTTP endpoint that receive a JSON payload. After this payload is parsed, Ethereum can know which API is targeted. Example:

You can find all APIs here.

Using these APIs directly is a bit too low level and requires lot of work. Dapp Developers should use Web3 instead. That’s what we will do in this tutorial.

Oh and by the way, Web3 is an “Isomorphic” Javascript library (YES! I managed to use this word in an article. I feel so smart now!). In other words, it means that it can be used both on the frontend and backend (NodeJS).

In the next section, we are going to setup our project and start the coding!

NOTE: it’s not strictly necessary to follow this part. You can skip it if you don’t want to code as you follow the tutorial. You can just look at the code examples and adapt them for your project.

In order to use Web3, we need a smart contract to play with, and a blockchain to run it.

Just to be clear: This is NOT a tutorial about truffle, Ganache, ERC20 token or Solidity. You don’t need to understand any of these to follow the tutorial. But we do need to interact with a smart contract, so I prepared a project so that we have something to play with.

Before that, we need to install these tools. They and are all written in NodeJS, and can be installed with npm, the package manager of npm. Follow these steps:

If you are curious, the smart contract is the DAI ERC20 token contracts/Dai.sol.

Next, let’s install Web3, the missing link to the blockchain!

Now that we have our project setup, it’s time to add Web3.

Web3 is an open-source library, and its code is available on Github. You could just copy and paste the source from the Github repo of Web3, but that’s a bad practice.

Like for the other dependencies, we can install it with npm. Web3 is actually already installed inside the project we setup just before. So you don’t need to do anything. You can see it by checking the dependencies section of package.json.

But if you need to install Web3 yourself in another project you can do it with:

In the next section, we are going to talk about Web3 versions (Yes, that’s a BIG deal!).

It used to be the BIGGEST frustration about Web3. It’s important to understand this.

Old stable versions of Web3 were on the 0.2.x branch. Then, when work started on the 1.x branch, the first versions were labeled “beta” versions. However, time went by, and… no stable 1.x version ever came out… The “beta” version numbers kept increasing for more than a year, going all the way up to beta-55!

From a version to the next one, you were lucky if your Dapp didn’t break…

Some projects, like Drizzle, stopped at Web3 1.0-beta35, the latest “stable” beta version, and it was ok-ish, but they didn’t get the latest features of Web3.

Fortunately, Web3 FINALLY released a stable version in mid-2019: Web3 1.2.0. ALLELUYA BROTHERS! (and sisters!). That’s what you should be using. And if you like to live dangerously and want the bleeding edge of the development, you can use Web3-beta55 and above. Not recommended unless you develop on Web3 itself.

Up next, we will finally start the coding and learn how to setup Web3!

Before you can use Web3, you need to connect it to an Ethereum node. And for this connection, you need a Web3 provider.

Without a provider, Web3 is like an empty shell that has no way of communicating with the blockchain: 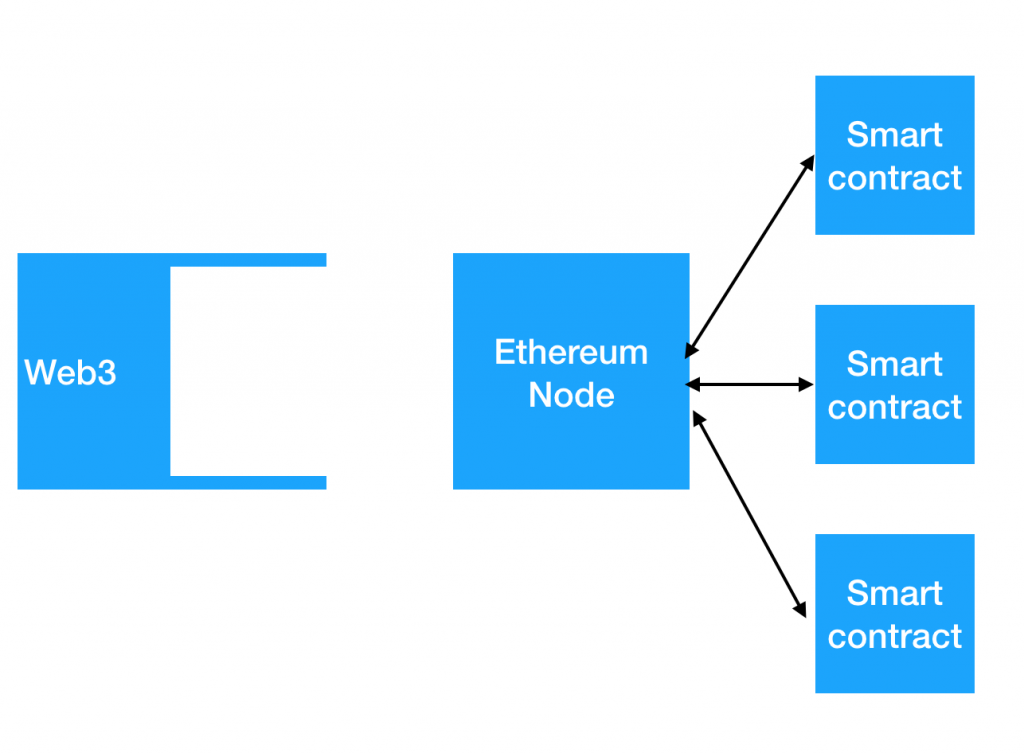 Give it a provider, and tada! The link with the blockchain can be established! 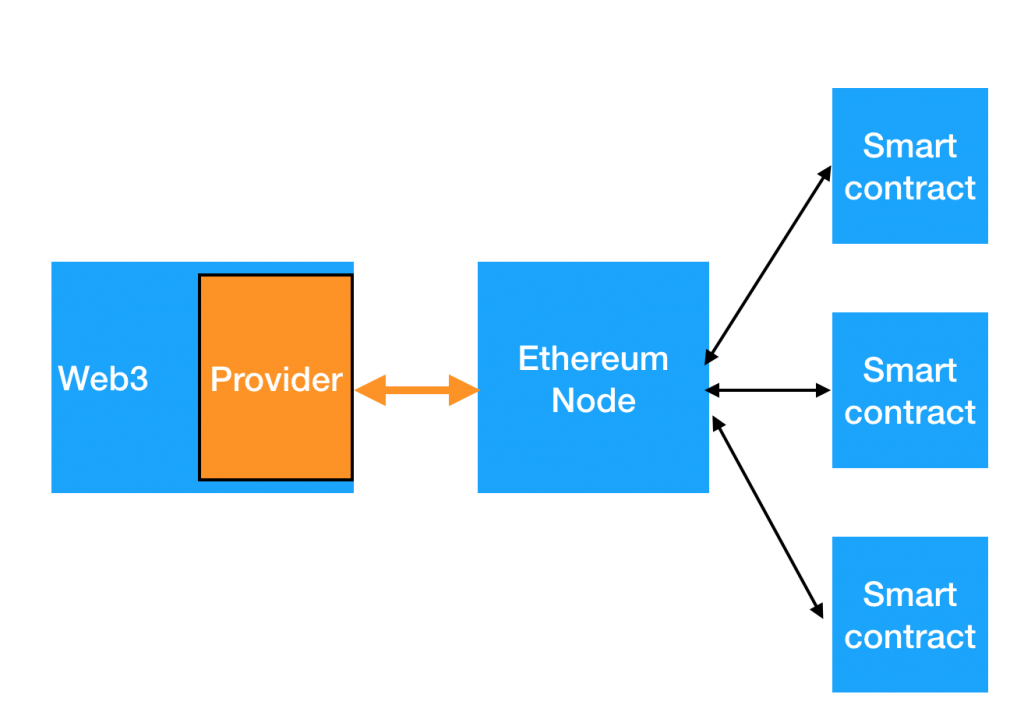 Providers can use different transports, like HTTP or Websocket. In general, providers use HTTP transports, but for some Ethereum APIs like events, Websocket transport is better.

You won’t have to create your own providers from scratch. You will use providers that either:

Next we will create a provider and connect it to Web3.

It’s time to put our knowledge to good use and start to setup Web3! Before we can interact with a smart contract though, we first need to connect to the Ethereum blockchain. Let’s do this now.

In your project folder, create a script file:

Inside, we are going to instantiate a Web3 instance. Add this code:

After that, we can communicate with the blockchain with the web3 variable

Next, let’s do something interesting with web3!

With our web3 variable, we can communicate with the Ethereum blockchain, but not with any smart contract.

To create a contract instance, we need:

This is an extract of the ABI of the DAI smart contract we will use for our example:

The big question is: How the hell are we going to get this ABI?

Truffle will put the ABI in a json file located in the build folder. But for our project we customized this location (because of Webpack… this is a long story let’s ignore this!). In our case the json file with the ABI is inside client/src/contracts/Dai.json.

How to optimize gas cost in a Solidity smart contract? 6 tips

Simple transactions on Ethereum cost from 20-30 cents to a few dollars. But complex transactions can be much more expensive.…

When you develop decentralized applications, you quickly stumbled upon this weird concept of "gas". That's very confusing for a lot…

https://youtu.be/jUmHCIAaYVs Have you ever heard of the 12-factor app? That's a document created more than 20 years ago that describes…